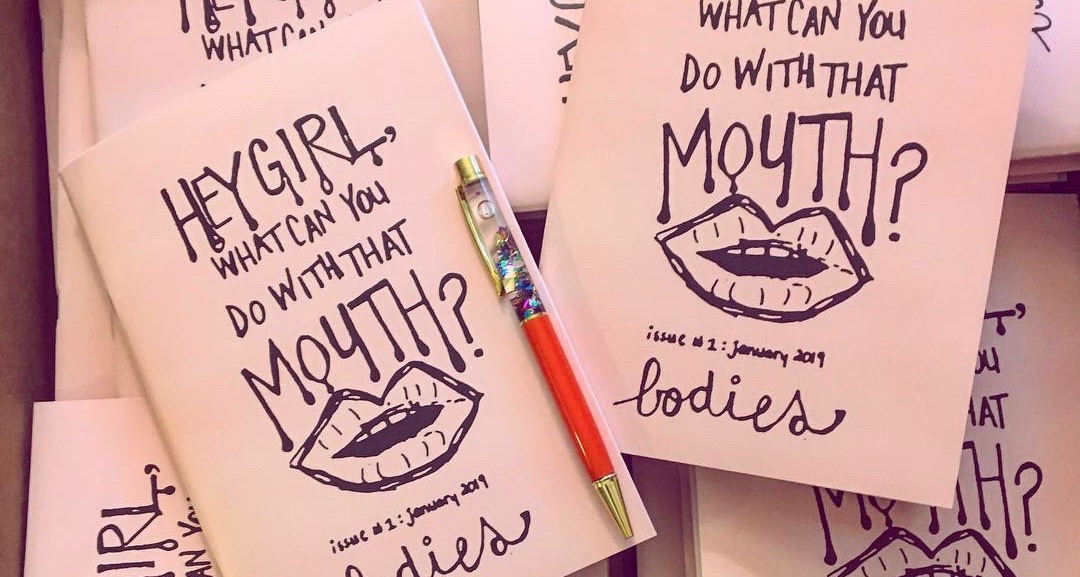 Recently, I did a thing.  I created and printed a collaborative feminist zine called “Hey Girl, What Can You Do With That Mouth?” Throughout this process, I learned a lot about DIY self-publishing and the art of zine-making, so I thought I’d share some nuggets of knowledge.

After joining a feminist writing group in 2016 and publishing mental health pieces here and there on my blog, I got a lot of feedback along the lines of “Holy shit! I relate to that too” and “Wow, we need more of this.” Frustrated by the lack of women’s voices in own education and fueled by recent movements that focused on women’s voices, I decided I wanted to create a space where I could share and others could share too. Also, as a poet and essay writer who kinda just does it on the side and doesn’t have any “legit” publishing aspirations, I thought this would be a safe outlet.

Zine is short for “magazine” or “fanzine.” By definition, a zine is a small, self-published work of text and/or images. Zines are generally low-cost or free (though that’s changing as they become a more popular option for publication). Historically, zines have been used by marginalized communities to spread knowledge, share art, or nerd out about a shared interest.

On that note, let me momentarily nerd out on a brief history of zines.

Perhaps the oldest traceable example of a zine is Thomas Paine’s “Common Sense,” published in 1775.  A handful of zines were made in the 19th century, mostly dedicated to literature; however with the rise in popularity of science fiction in the 20th century, writers and fans alike turned to zines to publish short stories and reviews, leading to works like “The Comet” in the 1930s and “Spockanalia” created by Star Trek fans (coined the Lunarians) in the 1960s.

In the 1970s, spurred by greater access to copy machines and the emergence of a punk scene, zines resurfaced again – this time a bit grungier and more DIY, centered on music and counterculture.

In the 1990s, zines surged again, thanks to the Riot Grrrl movement, to promote not only women’s punk bands but also to talk more about women’s issues. Some popular zines from this era include “Bikini Kill,” as well as BUST and BITCH which are now full-size popular feminist magazines. This particular movement really knocked the “fan” out of “fanzine,” allowing for more personal content and a greater variety of topics. Since then, subjects have diversified as well as the medium, ranging from the original photocopied versions to online versions to sexy glossy booklets.

My personal interest in zines started at a fairly young age. As a 90s child inundated in punk and grunge culture, I saw glimpses of zines, though I can’t pinpoint a particular one. I was a very creative (and weird) child, and I loved to write. I created magazines about my pet rabbits, pretending they were celebrities, so I guess this was my first fanzine.

Fast forward to college and graduate school. While becoming more entrenched in various subcultures and activist communities, I saw more and more zines and pamphlets and even helped contribute cover artwork to one of them, but I never really thought my work was important enough until I stumbled upon a zine library at a radical bookstore in Vancouver, BC in 2014.

I was enticed by the DIY-format, the oversaturated photocopies, the grit. I spent hours flipping through these zines and admiring the poems, stories, and artwork, created by women. I read about things I could relate to, like being followed home by a creepy dude or what it really was like to have a period. I felt a really deep connection with these works and perhaps that was the seed that fueled me to create a zine 4 years later.

How did I make the zine?

I knew I wanted to create more than just one issue of the zine (fingers crossed), so I decided the best way to gather submissions would be by settling on a topic. A lot of my writing deals with topics that have generally been avoided, such as body image and mental health, so I chose BODIES. This was pretty open: Body celebration, body positivity, manifestos, body trauma, eating disorders, dysmorphia, sexuality, asexuality, modesty, sex-positivity, mamas, beauty rituals, mental health, reclamation, memoirs, memories, fertility, wombs, periods or no period, weight gain, weight loss, chronic illness, etc.

I shared a call for submissions on my Instagram and Facebook and asked friends and family to share as well. Though most of the submissions are from people I know personally, I also received some from strangers, which was pretty cool!

Next, I set a realistic timeline. I wanted the zine to be finished around December 2018/January 2019, so I gave a 2 month submission period from July 1 to September 1, gave myself a few weeks to read and copy edit submissions, let contributors know the status of their submission by mid-October, and then gave a month for optional revisions. At this point, I was ready to put everything together by December, got it all printed by mid-December, and sent out the zines the first week of January.

While I initially wanted a more grungy and classic vibe to the zine, I decided to use an online printing company, Mixam, that made things easier since my submissions were digital (and there were a lot of them! 52 pages worth). It was pretty affordable, and I ordered 60 copies. I still created the cover on my own, using a hand-drawn image and then scanning it into photoshop for some edits. That part definitely turned out grungy.

To be completely honest, it was a pretty frustrating process the first time. Creating a document of all the submissions and a table of contents in finicky Word, fitting everything into the selected size on the printing website, and fudging around with a trial version photoshop was a bit of a headache, but I learned a lot and am excited to improve the next issue.

While my first call for submission asked for women-identifying and nonbinary persons, I’d like to open the next issue up others, giving preference to women-identifying, nonbinary, and otherwise marginalized voices. To do this, I’d like to cast a wider net for submissions and make a better effort to share the call for submissions beyond my mostly local network. On a more personal level, I need to get over my desire to do everything on my own and have a second pair of eyes edit the final copy. I had a few typos in the printed version that I obsessed over, but I’m accepting that it’s okay. I’m still on the fence about cost. I gave free copies to contributors and paid for their shipping, but I also got a lot more interest from “the public” who offered to pay for the zine and/or shipping. I didn’t charge this time, but I probably will next time to cover the printing and shipping costs.

Overall, zines are pretty damn cool! 10/10 recommend making and/or contributing to a zine, possibly even this one if you’re reading this post.

One thought on “Behind the Scenes: The Making of a Zine”